Meliá runs 350+ hotels, with many choices in Spain (181) and Portugal (14); coverage of major cities in Europe; a good selection of countries in South America; and 9 hotels in Mexico.  In the U.S., you can sample the brand in Atlanta, New York City or Orlando.

In Spain and Portugal, you can choose everything from golf or beach resorts, airport hotels, and business/conference hotels, to historic properties in wonderfully revitalized neighborhoods.

I’ve stayed in Madrid, Barcelona, and Bilboa — each in a great location, each different, each staffed with talented people.  I’m not a chain hotel kind of person, but I enjoy this one. 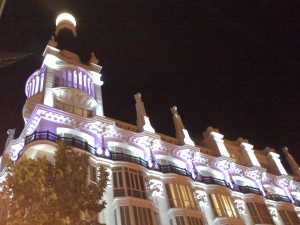 There are now four levels of membership:  MeliáRewards (equivalent to the old MAS Rewards Blue), a new Silver level, plus classic Gold and Platinum.  Depending on your level, you earn from 10 to 14 points for every € or $ on your booking (or YHI Spa purchases).

Points are redeemable for stays.  Upscale properties require more points, but I’ve never seen a date blacked-out or surcharged.   When you throw in some cash, you can redeem as few as 2000 points.  You get a small but nice discount, especially considering you only spent $200 or 200€ to get the 2000 points.  (Or follow a link on the Melia website for a free 2000 point sign-up bonus.)

MeliáRewards points can be traded for airline points, or used to buy the typical hotel program bling.

Every member gets one free night for their birthday, a nice feature carried over from the MAS program.

All levels get discounted rates on the Meliá website.  In the last six months, this “member discount” has been getting more emphasis, as has their “best rate guarantee.”  The website is one of just a few hotel direct sites that TripAdvisor includes in availability/rate searches — an indication that Meliáa is pretty certain their rates are going to stand up to comparison.  Sign up.

If you want free upgrades at check-in, you ‘ll need to get to Platinum.  Gold gets 50% off room upgrades.

For me, the one bad thing about Meliá hotels was the charge for Internet access.   I suggested that they could make a lot of friends by dropping that charge.  I’m pretty certain I wasn’t the only one suggesting that.  It’s a little tough for me to understand their exact strategy here, but they seem to be moving toward free access.  Depending on the hotel brand and your membership level, you get something between a free hour and unlimited internet.

+ Free mineral water — one bottle on arrival for most, a daily bottle for Platinum

+ Platinum officially gets access to Melia’s concierge floor:  variously called the Level, Red Level, Royal Service or Deep Lounge, depending on the hotel.  Whatever it’s called, “the level” has nice features.

–  The elephant in the room:  points now expire after a year of no activity.  Activity can include redemptions, transfers, and the like.  Don’t neglect your points.  They will vanish.

–  The 50% breakfast discount, which was quite nice, is gone, replaced by 10%, 15%, 20% discounts (for breakfast, snack bars, and minibars) depending on level.  We’ll be looking more carefully at the rates that include breakfast — both good and generous at Meliá properties we’ve visited.

–  You now need at least Silver for 2 pm check-out.

–  Gold, which used to get 10am check-in, now gets their room at 11 am.  I’m not a spokesman for the chain, but I’m thinking this isn’t going to be a problem.  I’ve never asked for anything outlandish, but I’ve never had anyone at a Meliá read me a rule book.   I’m pretty certain we once showed up at 10 am in Madrid with absolutely no status, were ready to have our luggage put in storage for a couple hours, and were cheerfully shown to our room.

If the staff doesn’t seem to be on your side; if they’re not helping you enjoy your visit; check to see if you’re really in a Meliá hotel.

Here is the new “levels” chart with a link to the 2000 point sign-up bonus.  Enjoy your stay.